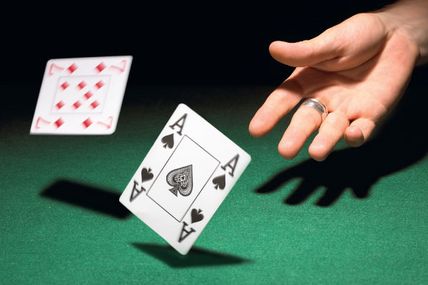 Late position has quite a bit more flexibility pre-flop than the other positions but play is still decided on using the same factors as middle. You must be conspicuously aware of the other player’s betting and play habits. This position gives you a good all-around position with the remaining betting rounds but the real advantage of this position lies in knowing how many players have entered the hand and their betting actions. I almost always raise or re-raise in this position when I have a top or mid-tier hand unless the pre-flop bets have already gotten out of control. In these cases I usually limp in to see the flop. If any of the early or mid-position players have limped into the hand without raising the bet, raise here; you will force out most of the players with weak hands. If for some reason no one has voluntarily entered the hand yet, raise with impunity with almost anything. The blinds will typically fold like origami under the weight of a big raise. They don’t want to be in the blinds anyway and will take any reason to get out from them.

A blind position is the traditionally the worst position in poker but I have learned to use it to my advantage. Observation and surprise are your only advantages and subsequent betting position your greatest weakness. Pre-flop you will have the ability to watch the actions of the other players while not surrendering your hands perceived strength or weakness. How you bet when it is your turn to act will be your opponent’s only chance to decipher your hand and will be an opportunity to feed them misinformation. These positions are also a special case because many times you will be asked to call a raise and you will have a discount to play as you are already partially committed. Most players think like this; calling pre-flop may seem logical with a garbage hand like Q-7 or 9-4 but these hands will often get someone in trouble. They are second best hands and there are no prizes for second best. Limit the number of hands played out of the blinds when there has been a raise. If you’re going to chase a hand chase strong hands like straights or high flushes. Don’t bet on hands that can only pair with a bad kicker. Pocket pairs are your friends in the blinds, they are easy to decide what to do with after the flop and can improve dramatically by flopping a third card of equal value and forming a three of a kind.