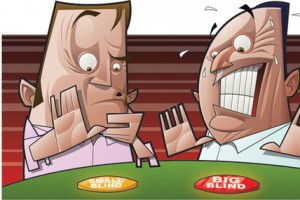 Building on the fundamentals of pot-odds and small blind position, this article addresses the finer points of playing the big blind, teaching you how to effectively defend your blinds (calling a pre-flop raise). As with the small blind, the big is in a bad position. You are forced to put money into the pot before seeing the hole cards and must act before the other players.

Because you’re obligated to put money into the pot, it’s important to play smart and never lose more money than you would by simply folding. The common mistake is calling pre-flop raises. Inexperienced players often try to defend the blinds because they feel committed to the hand. This puts them at a disadvantage later on when blinds typically increase or the number of lost hands has diminished their chip stack. You must break from the idea that your blind bet made you pot-committed. While it’s true that you have better pot-odds, you cannot call ever raise.

Understanding key concepts and factors like pot-odds and your opponent’s betting and post-flop behavior will allow you to defend or surrender your blinds at the right times. Traditionally, if the first player to act outside the blind raises the blind, the blinds must play tighter. Conversely, if play folds almost all the way around to the button, it’s relatively safe to defend a wide range of hands even when presented with weaker cards.

The type of player making the raise is a very important factor to consider when deciding if you should call. A conservative player doesn’t call the big blind or raise trash hole cards, while a maniac will play anything and bet a hand even in early position. Observe your opponents to understand what kinds of hands they are playing and their positional behavior when raising, and adjust your bets accordingly.

I suggest a very tight range for playing in the blinds. A general guideline to defending your small blind is to play with hands like; suited connectors, 77+, 10J, AJ, AQ, AK and raise when holding a pair of Queens or better. If you’re the big blind you can call with a larger range of cards including smaller pocket pairs and lower suited connectors.